Heartbreaker 1/2 and a little heartbreak

So I am so good at blogging :)  It seems that I like to write race reports about 3 weeks after they happen.  So I left off at the start line of Heartbreaker not feeling it really :)  Well the gun went off and I started running.  There was a girl named Hayley who teaches at the gym I go to and she is a very talented runner, I talked to her a little before the race and figured that we would be around each other during the race just going off past experience with her.  At the same time it gave me a little bit of incentive to push harder.  Mile breakdown-

1-6:24, felt good :)  No big hills, passed Hayley running my own race and was wondering if that was a mistake.  I prefer chasing to be being chased, but I decided that it was time to try something new.  I tend to let people I think are faster go ahead so that I dont feel any pressure from behind.
2-6:27-Starting to climb, this course was very hilly and while I had run a good portion of it a couple weekends before it felt hillier racing it.
3-6:37-More hills, I was trying to pace well knowing the Heartbreaker hill was coming and it was a doozie.  I was keeping my teammate Amy knowing that she was going to tear up this course, she is a fastie.
4-7:08 Heartbreaker hill lived up to its name!!  So there was a race within a race.  They had timing pads between miles 3 and 4 to time everyone on the hill.  Kind of a fun idea.  I dont mind hills because I run them alot around my house, I actually feel like they are one of my strengths.  This was a tough mile.
5-6:07 What goes up must come down :)  there was a very steep downhill that was almost too steep, you know that kind of hill where you have to put the brakes on or you are going to biff it
6-6:31  I could still hear Hayley right behind me and honestly it was keeping me moving.  I was trying to pay attention to this portion of the course as it was part of the loop we would be running twice.  This mile was tough, had some hills that were gradual but long
7-6:22, finally some flat ground, it felt so good!
8-6:41- some more hills
9-6:46 I was getting tired but i remember thinking "you have pushed this far, dont throw it away now." beginning the loop again, trying to focus on my form.
10-6:49 Flat ground was coming and so was Hayley I heard her pick up the pace and actually waved her to come up beside me.  We chatted for about a quarter mile, not alot of chatting but some.  I remember thinking is she is going to kick it in for a 5k I am just going to let her go.
11-6:24-flat ground again, thank heavens
12-6:33 Trying to hold on through some big hills and looking for some of my teammates and my coach for some encouragement
13-6:28- I was almost there!  My coach ran alongside me for a little bit and was informing me on the location of Hayley(she knows her too), to her I responded, "I am running my own race."  She said "I know, but you are still talking."  Her nice way of saying move your rear faster and stop talking.  It was just the mental boost I needed.  In past races I have given up in the end mentally, if someone was close I would let them go, it was easier for me.  This time I found the fire in me and pushed.  I found another gear and it felt good.
.14-5:55-The last 200 meters were on the track at the stadium, I felt like I was flying and it felt so good.

Finished 1:26:02 3rd female, 1st age group
Bonus-Last Saturday I got a $50 giftcard in the mail for being a top finisher on the Heartbreak hill :) 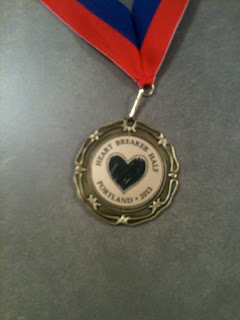 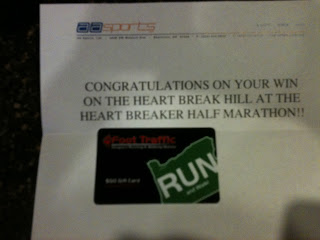 This was a great confidence boost for me, mentally I had stayed strong enough in fact that I registered for the Eugene marathon with a big goal.  I finally believed that I might be able to pull off a 3 hour marathon.  I was on cloud 9.

Now comes a little bit o heartbreak for me, just a little :)  After a really great start to training or more like a continuation with a new goal, I have some pain in my left quad.  the doc thinks it is just muscular and I think so too but i dont want to push it for fear that it will turn into something more so for the first time I am not running a race that I am registered for.  I am supposed to run a 30k tomorrow, a first for me at this distance.  I have been excited for this workout because it is basically at goal marathon pace which is no joke.  I have felt so strong and this bump in the road came out of the blue as I have not been having any issues at all there.  I was hoping it was just one of those training pains that comes on quickly and then leaves as quick as it came but it is not.  After a couple of days of rest and then running, I found myself back at square 1, so I decided that while I know that I could probably push through the race, it would not be without discomfort and it would not be at pace, and it may cause further damage that might keep me out for longer.  So there you have it a little heartbreak that hopefully heals quickly so I can get back to training for Eugene full speed ahead.