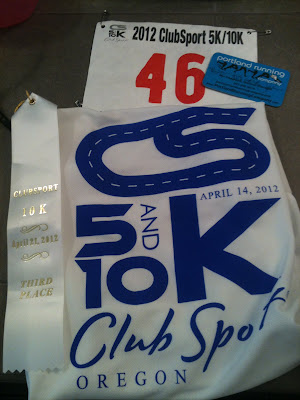 I better hurry up and blog about this or I will forget what I want to say :) I swear I write so many blogs in my head while I am running and then never get around to actually blogging.
Okay just to clarify how I feel about shorter distances and track, they scare me!! I do not have a background in track or Cross country. I did not run in highschool in fact I really did not like to run. So why did I feel the need to race a 10k? Well I feel like I am trying to be the best runner that I can be and so I knew that doing this would help me push myself and help me to know where I am. Oh, and I really wanted to face my fear :) So with many reservations and fears, I registered for my 1st 10k race in over 10 years.
I was not planning on tapering as I am at the peak of my marathon training. in fact, not only did I not taper but I had some pretty tough workouts during the week and was kind of wondering if I was even going to be able to hold a respectable pace.
I woke up before my alarm and was feeling pretty good about running strong. I was going to run my own race and run as strong as I could whatever that turned out to be.
The race started at 8am and I got there around 7am. It was a beautiful morning, although chilly and foggy. I knew that once I started running it would be the perfect temp and the sun was burning off the fog. I was immediately greeted by Paula (the race director) and after catching up with her for a few was escorted to packet pickup. :)
I ate part of a bagel and got ready. I went out for a 2 mile warmup, got back, put my jacket in my checked bag and headed out to the start line. It was 2 minutes to the start which was great timing. Not really enough time to get cold or nervous. I chatted with a really nice girl next to me and then we were off :)
Mile 1: 6:24, I think this was the only accurate mile on my GPS. I had really debated on whether or not to wear it. I really wanted to run this race by feel. I was beginning to wonder what I had done, I knew it was going to hurt a little :)
Mile 2: The course was winding through a neighborhood and into a park with some thick wooded areas. I remember thinking that I could just make this a good tempo run and pull back a little but I just kept pushing.
Mile 3: During this mile I found myself winding around a park, there were some steep downhills that were covered in moss and I had to slow a lot, it was not worth slipping and injuring myself. When my watch beeped it said 7:10 and I actually said outloud, "Come On". My body felt like i was running faster but I tried to push harder.
Mile 4: Going down into the park meant that I had to climb out. I was finally starting to feel good and was no longer thinking about slowing down and copping out.
Mile 5: This was a great mile, wish had some accurate paces from my watch but it was way off. I was catching the girl in front of me.
Mile 6: this mile help some really big hills!!! I pushed and tried to help push others. Angie(the girl I had been keeping in my sights)was slowing and struggling on the hills so I started talking to her and trying to get us both up those darn hills. We did it and then stuck together. We turned back on tot he road and I realized that we were closer to the finish than I thought we were. I felt so good and felt like I was flying. I told Angie that we were going to give it everything that we had and I pushed harder:) I saw the clock and knew that I was going to break 4o. 39:48, 6:24 pace I was shocked!!!! Finished right in front of Angie and felt bad but we both were giving it our all. 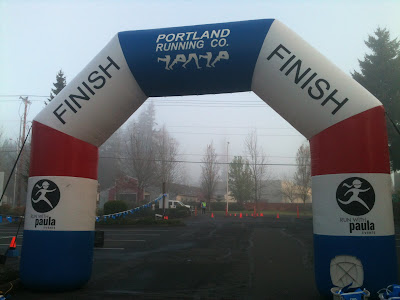 I was not sure of my time so I stayed around for the awards. I ended up taking 3rd behind some very talented runners. Hallie Janssen (Olympic trials runner) took first in 35:something.
She was so nice and gave me some good advice.
I won a gift card which was a nice surprise :) I talked to Angie because I was feeling guilty about getting a gift card for beating her by 1 second. I needed her to know that I was not trying to beat her. I really was just trying to do my best. She was so sweet and told me that I deserved it and that there was no way she would have got the time she did without me encouraging her up the hill and through the finish. Runners are so nice :) Love this community.
It was a great experience :) A great way to wrap up a 77 mile week.
In other news, I got a new treadmill a couple of weeks ago:) This is what my little spot looks like. 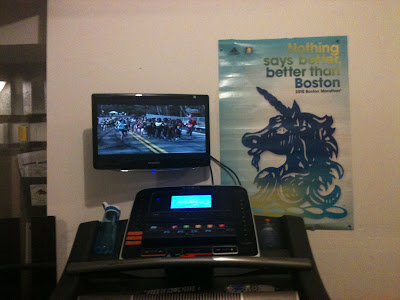 I have hauled my Boston poster around for 2 years for just this purpose :) I plan on adding some of my race bibs and other inspirational things. This is where I did 12 miles of my 22 miler yesterday, watching the Boston marathon.
Kudos to all who ran and completed the race yesterday! Those were some seriously tough conditions. True character was shown :) In awe of your determination!!
I have to say thank you to Nicole for believing in me and always telling me that I can do things that I think I can not. You are always lifting and supporting others and it does not go unappreciated!!
Posted by Stephanie@Soggy Runner Girl at 8:22 PM