So obviously from my desperate last post I have a problem :(. Pretty sure I have piriformis syndrome or as my Team Athena Coach calls it Dumb A** syndrome. This is the same thing that caused me problems before Boston in 2010, although then I ignored the signs until it literally prevented me from running for the 3 weeks before Boston. So since then it has been fine until this training cycle when I upped my mileage quite a bit. I tried to be smart and started seeing a sports chiro regularly for maintenance. But then he was out of town and I ran hard a lot while he was gone. 10k, 22 miler, yasso 800's, hilly 18 miler, you get the picture. I think I just got behind and have been trying to get back to a happy place with my butt ever since.
So with my marathon scheduled for the 19th my taper took on new form. There have been decisions made not to run, then decisions to run, doubt, fear, peace, you name it I have probably felt it. So there has been pool running, ellipticalling, swimming, and some running. I have done my best to keep my fitness up and I think I have done a pretty good job. I have a backup plan and have secured a bib for the Utah Valley marathon on June 9th.
So I had plans to run the Hippie Chick 1/2 this past Saturday as a training run and my butt had been feeling better so I got the okay to run it. I planned to run it with my friend at an easy pace and just have fun. It was fun but I did not run it all at easy pace. I ran the first 4 miles easy with my friend and then she was in the zone listening to her iPod and she wanted me to go. So I started running what felt good. Smart? Anyway it felt pretty good and I was keeping a pretty good pace, right around 7min/mile. I ended up finishing with an average pace of 7:30 according to my Garmin which measured the course a little long. After finishing I went back for my friends that I could. I had the opportunity to meet Tasha from Healthy Diva It was fun to visit with Amanda from Runninghood on the ride to and from, she is hilarious! In hindsight I should have probably slowed down and run with them but Amanda told me to not second guess what I did so I am moving forward. 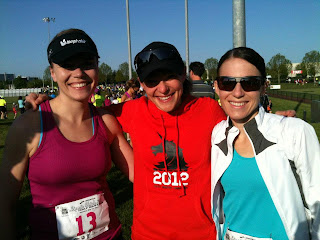 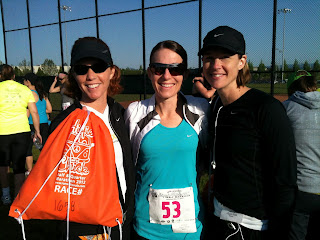 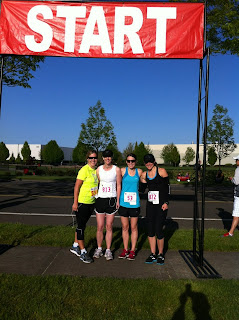 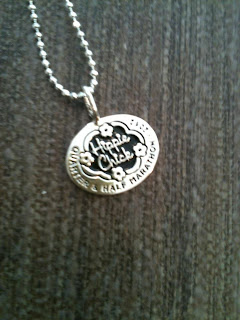 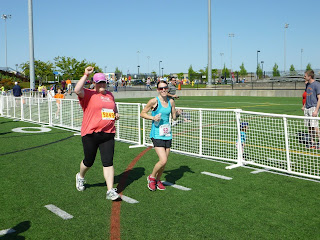 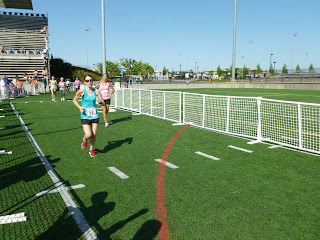 Now comes the hope and faith part...as of right now I am going to run Windermere on Saturday. I am not going to be dumb, I have a plan. If my body is not cooperating I will slow way down and use it as a training run or DNF(this would be tough for me to do but I will try and be smart). I know many people think I am crazy but I feel this is what I need to do. Time goals may go out the window in fact while I want to run fast I really don't want the clock to define my success.
Posted by Stephanie@Soggy Runner Girl at 11:27 PM