So that fact that it has taken me almost 3 weeks to write this probably gives you a clue as to how it went.  In the words of Amanda from Runninghood, there was and still is a lot of race residue.

Let's start from the beginning, when I made the decision to race the marathon I knew that I as not 100%, maybe 75% :/.  But as anyone would I prayed for a miracle and hoped that there would be race day magic.  I tapered and crosstrained to try and give my rear end and hips a break.  I tried to do everything right. I packed up and boarded the plane to Spokane solo. My friends are awesome and decorated my door with some awesome inspirational quotes.


I felt loved and was excited and nervous but I just went with it, trying not to over think anything.  Arrived got all checked in found some of my favorite foods Costa Vida chicken Salad) and sat in bed eating and watching ER.  Oh and I iced and rolled my rear end.  It was aching a lot but I just tried to put it out of my mind. After all I was there and I was doing it.  I did not sleep all that well which surprised me but I think it may have just been too weird for me that I was all alone with no one who needed me :)  I also planned on sleeping in and that did not happen either.

So I got up and got ready for a little shake out run in downtown Spokane.  This was very nostalgic for me because I went to highschool in Spokane and as I was running around I had so many memories come back.  I could feel my rear as I ran but it wasn't bad and I just put it out of my mind.  The sun was shining and I was ready to get the show on the road :)


I met up with some high school friends for lunch and shopped a little.  I tried to keep busy knowing that was the best thing for me mentally.  I drove around my old neighborhood and my old house.  When I got back to the hotel it was around 4pm and I still needed to head to the expo.  The great thing about staying at the host hotel was that it was so close to the Finish Line and the convention Center where the expo was.  Now I would not really call this an expo, it was more a packet pickup with a few vendors.  One sample, really one?  I know every expo cant be Boston but really?  A little disappointing but I got over it :)  I already knew that I liked bigger marathons but this was another thing that confirmed that to me.  So I headed back to my room to get all my gear laid out and make sure that I had not forgotten anything.  I was happy that I had not because been there done that before Boston.  It is not fun to realize that the outfit you were planning on wearing was not with you.  All ready :) 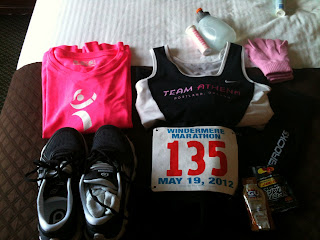 Now onto figuring out what to eat.  Wendy's was close by so I decided on a baked potato and when I wen there they actually had baked sweet potatoes.  I could'nt decide so I got both, it was a rather unsatisfying meal but for good measure I had my pre-race soft serve ice cream cone. Then it was time to try and get some sleep, unfortunately I had a huge headache and was having a hard time sleeping.  I had a normal prerace night waking up every hour paranoid that I was going to wake up late. I got up around 4:30 and hoped in the shower to wake up and it is just easier to tame my mane when it is wet.  got dressed, glided up, and made my breakfast.  I was out the door at 5:30 for a short walk to the Coliseum to catch the bus to the start line.  There were several other runners walking over and we chatted some, the weather was beautiful, sunny and around 50.  cool but terrific running weather.  I was hopeful and ready! 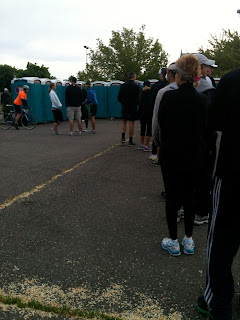 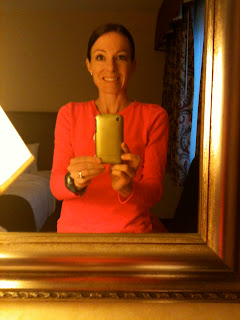 It took about 35 minutes to get to the start line after dropping off most of the runners at the half marathon start point.  When we arrived there was about 20 minutes until go time.  I hurried and got in the porta potty line and started to get a little nervous.  It was quite chilly an I admit that I took my time in the Porta potty taking off my pants and putting on my arm warmers, making sure everything was just right.  I dropped my bag and it was 3 minutes to 7am.  Perfect timing!
As I lined up I realized how small this marathon really was, about 400 runners.  Why oh why did I pick this marathon when I know I prefer medium to big marathons?  The countdown started and we were off.  It felt so good to finally be running after all the junk leading up to the race.  I was just happy to be there at this point, that would change :(  I hesitate to put my splits on here but I think it is all part of the healing.  Failure is a part of every success, right?

Mile 1- I was happily chatting with the guys around me, and could not help but notice that there was only 1 girl in front of me.  As my watch beeped I remember saying to the guy next to me, "well that pace is not part of my plan, i am going to slow some. 7:10
Mile 2-Everything was feeling so good and I chucked my gloves at the aid station. 7:20
Mile 3-Started running with 2 guys who seemed to be running together, so of course I asked and they were.  we were running the same pace so I just stayed there.  7:14
Mile 4-I was wondering if I was going too fast but I was also so happy to have found some people to run with.  Found out their goal was 3:15, perfect :)  I told them that I was going to stick with them if that was okay.  It was nice to have people to talk to.  7:14
Mile 5-I was very conscious of my hydration,  I was not going to get dehydrated, again, been there done that. :) 7:22
Mile 6-12  Everything was going so well, my glute felt good and I was so happy.  It was a little warm at times as the sun was beating down but I was still good.  Took several sport beans at mile 8 and water and gatorade. 7:22, 7:17, 7:22, 7:19, 7:31, 7:23, 7:21
Mile 13- At about mile 12.5 the wheels started to come off, I cant really describe it but it was like my legs just firing correctly.  My right quad was aching and I instinctively knew that this was not something that was going to go away. I quickly assessed my options and slowed in hopes that I could hold on to my B goal.  7:23
Mile 14- Shortly after crossing the 1/2 mark things started to go downhill fast.  My legs were hurting and I was getting really discouraged.  My guys were gone and I was pretty much alone.  I was trying to dig deep but I still had over 12 miles to go.  I was not sure what to do, I had told myself that if it got bad I would DNF and save my legs for Utah Valley on June 9th.  At that point though I really was hoping that I could pull it out. 7:50
Mile 15-18  A lot of bargaining going on with myself.  What to do?  I found myself completely stopped on the side of the course crying around mile 17.  Both my legs seemed to be shutting down and I was watching my B and C goals slip away.  I really could not fathom even starting another marathon in 3 weeks.  I was not sure I was meant to run another marathon ever. 7:56, 7:45, 8:14, 8:47
Mile 19-I decided that I wanted to finish and while my legs were extremely crampy and achy I knew that eventually I would finish.  I wanted to walk and I did.  It seemed like I was walking more than running even though I wasnt.  I needed a goal to get me through so I looked at my overall time at that point and realized that I could still BQ and because I am old I had until 3:40.  So with an actual Plan D I plugged along.  8:39
Miles 20-24 It was ugly, my legs hurt and I was so frustrated with them.  I tried to concentrate on my form and tried to keep my head in it and i was wishing so bad that I had not gone alone.  I needed someone to look for, someone to cheer for me, and I would have given anything for someone I loved to run with me.  I needed support in the worst way!  But I knew that really I had to do this on my own, this was my battle!  "Feel it, Fight it, Finish it" kept running through my head and I was feeling it and fighting it. 8:29, 9:06, 10:42 (cramping bad), 9:09, 9:42
Mile 25- The bridge on the Gonzaga campus was when I finally knew that I would finish this thing, I still had a little to go and it was going to hurt but I was not giving up. 10:12
Mile 26-end- I was emotional and was barely hanging on.  I was fighting back the tears trying to find some joy in finishing.  To top it off I got passed by a woman with about 3/4 of a mile to go.   The finish line seemed to be so far away.  As i crossed the finish line tears immediately streamed down my face.  I was disappointed but proud of myself for finishing.  9:56,8:45 (Garmin 26.39  3:35:09)
Official  3:35:06
5th female
1st in my age group

I immediately picked up my bag and found my phone so i could call my husband.  I was tearful and so wished that he had been there.  I don't think I will travel alone to a race again.  I was not sure I would ever run another marathon again, I was convinced that I was not meant to be a runner.
In the almost 4 weeks since the race i have gained alot of perspective!
I am a runner.
I was overtrained.
I can not run 80+ miles a week and not ice, roll, massage, on a regular basis
More is not always better
I  am not superwoman.
Running can be fun again
Numbers Will NOT define me